skip to main | skip to sidebar

The art of getting by

Just like that we went from two to three. I knew that with both our families far away we'd have little help and that my arting days would be brief, if any for a year or more. Despite my correct assumptions, I still I didn't actually know what its like to have a baby until I had one. And maybe a different mom would find a way to art, in my case, this baby doesn't leave my arms. What I manage now is a brief wild sketch with her watching me from my lap, with a random marker & a random notebook. Sometimes a sketch while she's asleep. These magic moments with her are art in of themselves. While my brain still paints, my arms are waiting for a later moment in life, busy holding a child. Meanwhile, I'm still dreaming 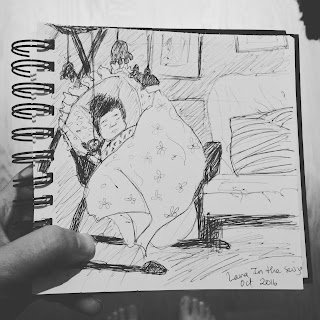 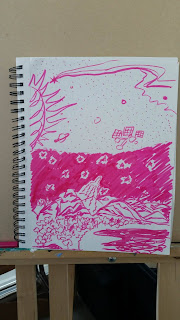 Changes, moves, travels and I suppose interference with painting. But here I am and I will keep on this passionate hobby. It was a funny thing when I gave away a couple of unfinished paintings. This one had a story personal to me. But my niece who had decided to adopt it saw something completely different here. Not only did she interpret the feeling of the painting radically different from me. She also saw colours differently. It was just amazing. 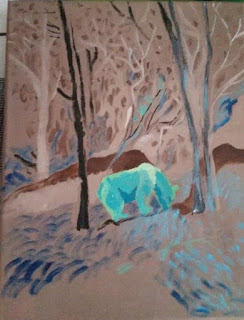 It made me ask myself if my own story for a painting requires sharing. And right now, I only feel the process matters. Painting is a different form of communication (not like language) and right now I don't feel that it must be received as intended. (Though many a professor would disagree with me). Something to think about :)
Posted by d at 4:29 PM No comments:

Hey!! It's been so long, and I am only now starting to attempt at catching up on the art work.
Aside from being fairly busy (moving, traveling, work, etc - the list goes on)  and not having nearly enough time to sit down and make something - I also left school again, and post-school I have been trying to figure out what kind of art I want to make. It's such a broad category of potential, that I've felt frozen in indecision. Until I realized, I don't need to plan, or more like..I should stick to my original plan and what I had been working on before the break. 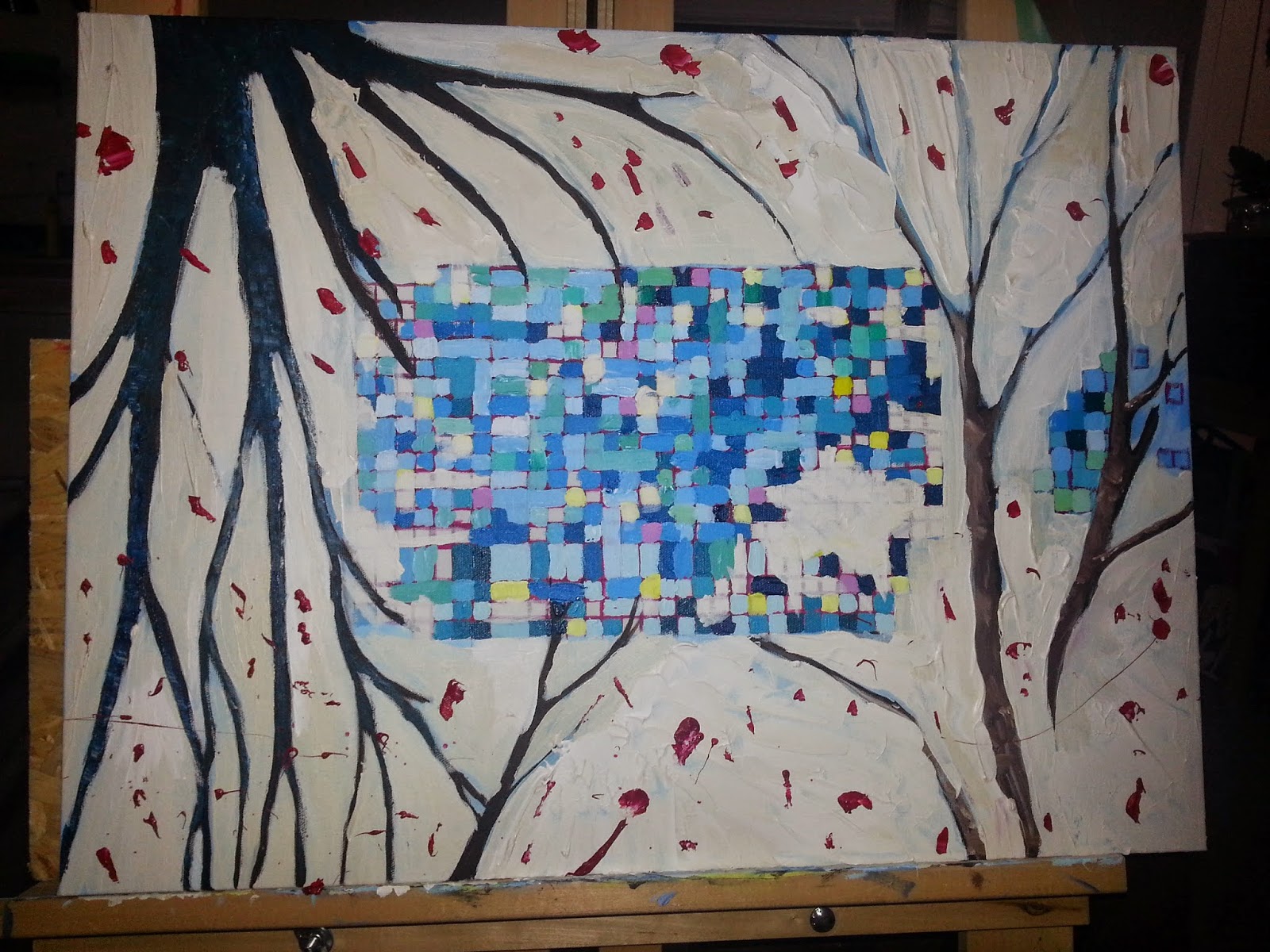 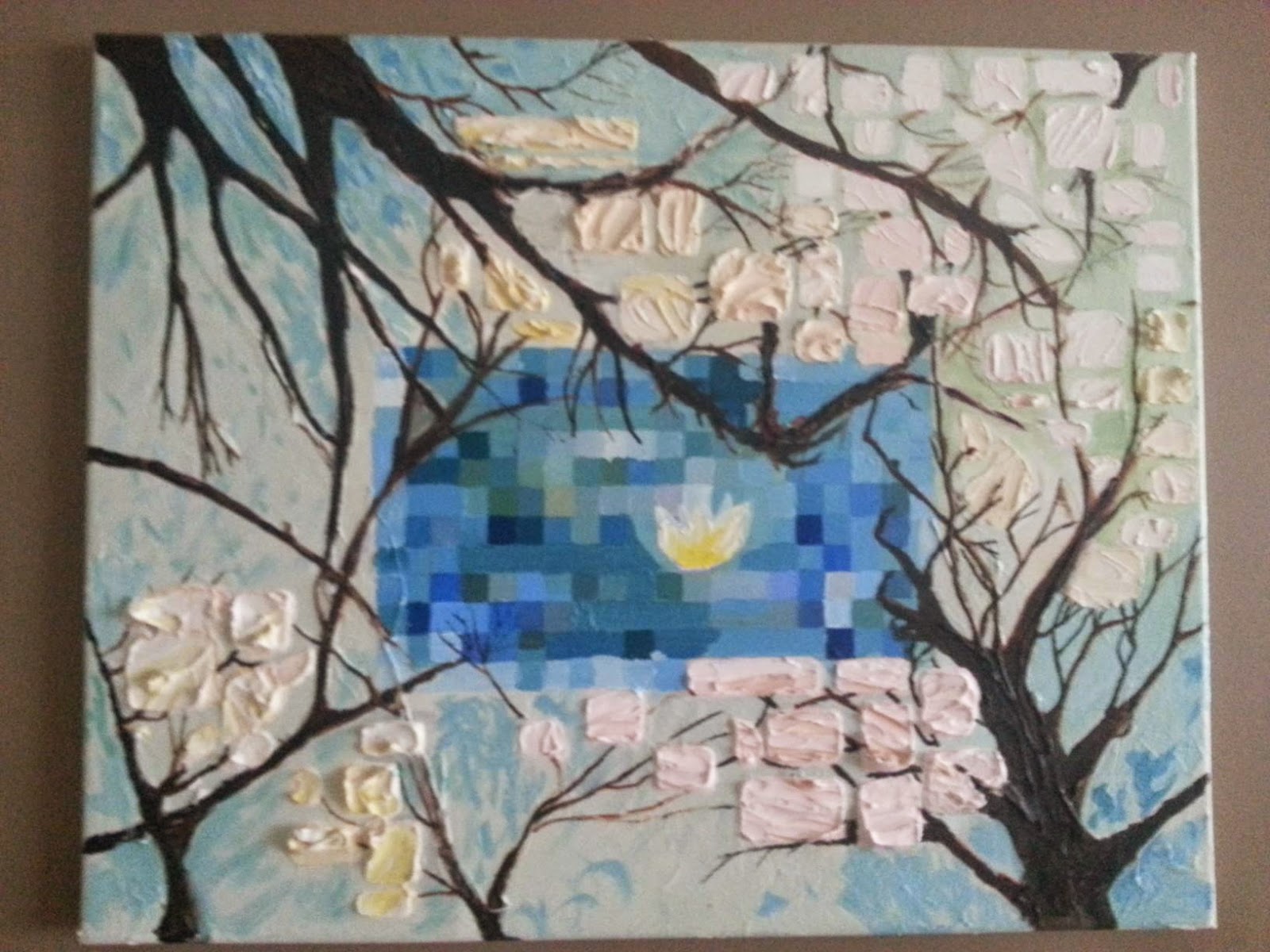 The second one is not quite finished yet, but I am getting to the end of it, and to a point where I can stop to take an evaluation of where I am. I thought the first one was more successful, but the second had ideas that I wanted to try out.

These issues I will try to broach in the 3rd painting. I am not yet sure how. :)
I had planned to make 5 paintings of the Pond & Tree series. Three more to go!! This whole project may take an entire year. But luckily it won't be the only thing I'm working on.

Fun side project, an invitation to a Badmitzvah party!

Again not finished! I will try to improve with my photos. The final version had all the flowers/leaf detail finished. The print shop then added various colours of the line and also text in the bottom left corner for the party info. This was a really fun project because it was simple black & white drawing and I also felt that keeping my black pen sketchbook had paid off. Making this invitation was as natural as just another night with my sketchbook. 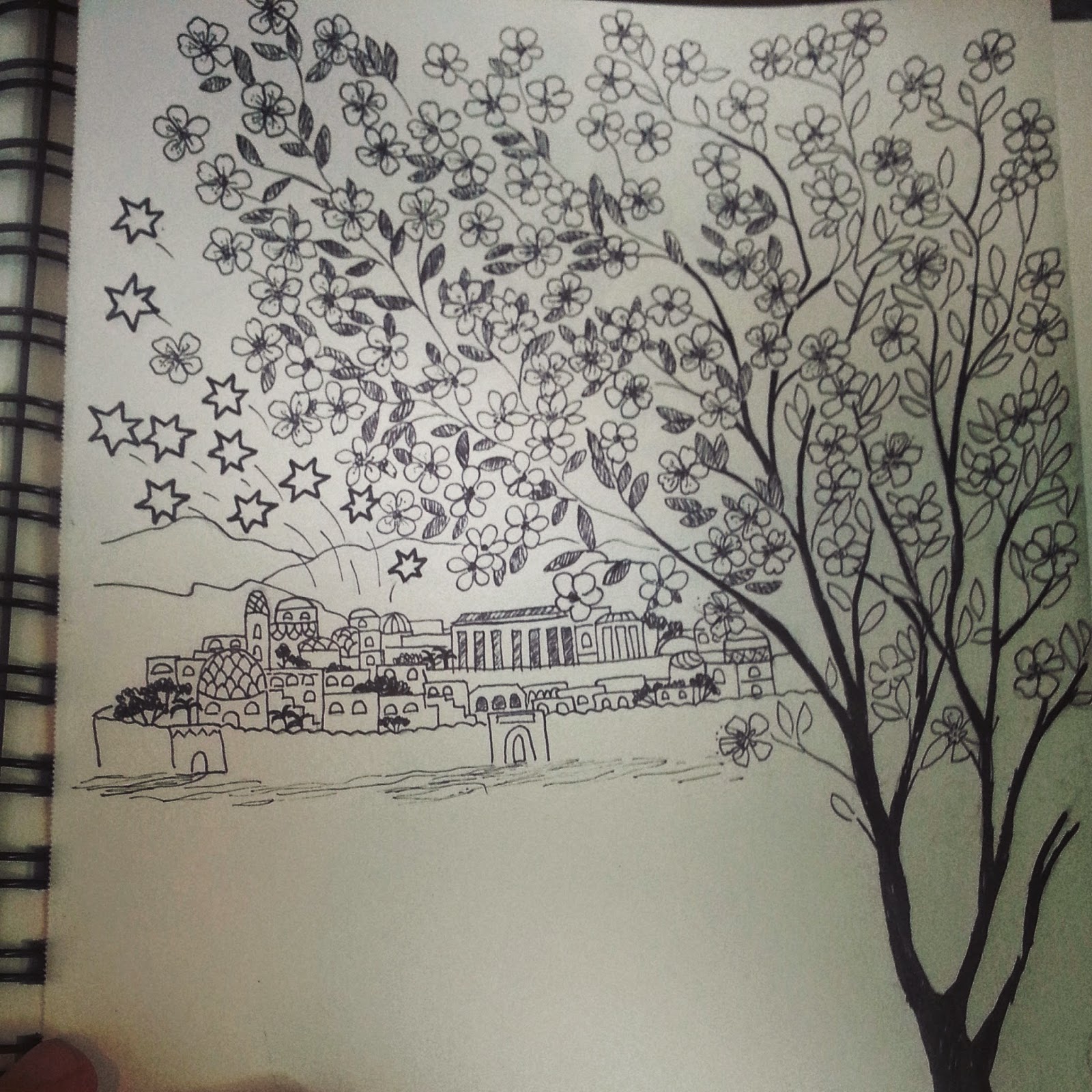 Taking photos inside a museum

This is not my usual type of post, but I have thought I do not write enough.

A question arose (in the middle of the night) whether an art gallery/museum is doing itself a disservice by not allowing photographs to be snapped by its attendees of a feature exhibition. The photos typically wind up on Facebook or Flikr as a free cultural advertisement, and those struck by this would naturally want to partake in similar activities.

I wonder if I can say this about taping of an orchestra symphony... perhaps not, what do you think?

Once in a while I have some doubts about any of my time spent labouring on art, and how it fits into a grander scheme of labours in general performed in a society. The doubt is hard to separate from, but soon enough routine puts a dimness over it, and sets it into the background. And then, I come across a quote that gives me a bit of a direction and a little bit of hope: "…it is only from the insights of its own creative seers and artists that any people has ever derived its appropriate, life-supporting, and maturing myths and rites" - Myths To Live By, Josepth Campbell p.48 :)
I won't get into contemporary form of myths and rites, but I do see it all around me. I'm working in different forms, trying to mature and trying to express all that I see around me. And that is art.
Posted by d at 10:44 AM No comments:

Wow!! It's been so long. What's new? I participated in a project that's a collection of drawings for viewing or colouring. It's fun and contemporary. Come find it here to see a few samples and maybe buy a copy, if you'd like: Click!

There's a post on this blog somewhere about me leaving school. Based on one whimsical conversation, I went back to the same program and degree again this fall. One course per semester only so I don't feel overwhelmed with homework. School has its benefits that are not impossible but are hard to come by when trying to art on my own. One invaluable thing is an experienced professional artist giving his full attention to my work for 20 minutes per week or so; which almost never happens in the real world (for me).

This course is abstract art which gave me new ideas to play with. Composition is what haunts me now. These are works with stencils and impressions. I was happy to discover accidental movement in the composition. 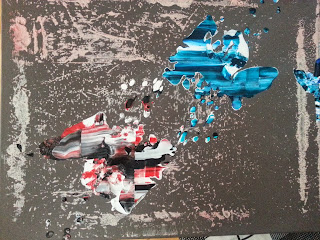 Another aspect of painting was helpful to learn (that I wasn't doing at all before) was the composing using collage and then painting afterwards. And the nice tiny accidental paintings that happen on the side. 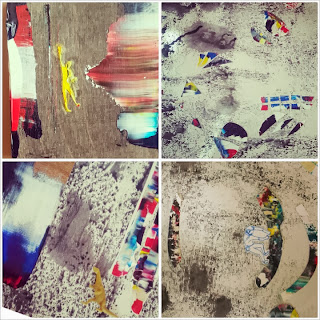 On a personal note, somehow, at some point I've become a novice climber now? Not sure if you can see the climbing dudes below. 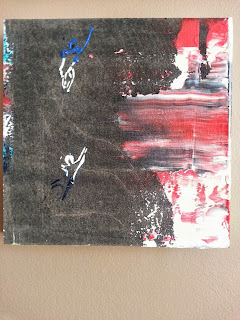 Reverting back to childhood

I can't seem to sit down still for more than 30 minutes. So the painting is just a mushing of paint around and around canvas and a feelings of childhood, houses and flowers, houses and boats and bridges to the houses that are on water, and houses in yellow fields of sunflowers and on on on :) Patience when will you return to me? :) 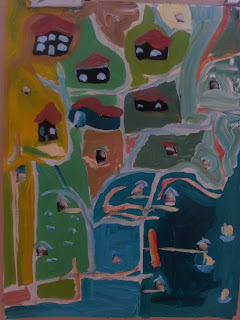 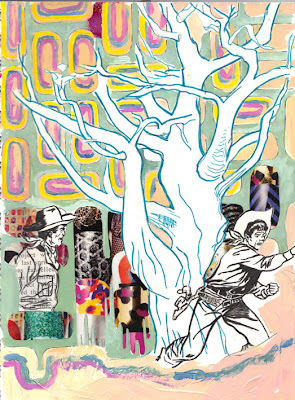 Oh cowboy, save me from these nail polish options. 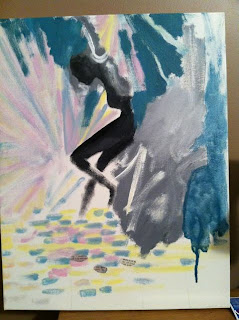 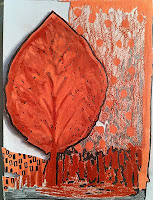 Welcoming in or chasing away 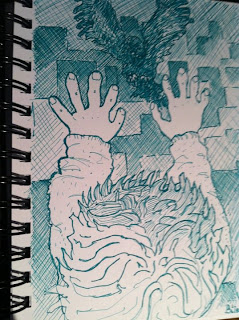 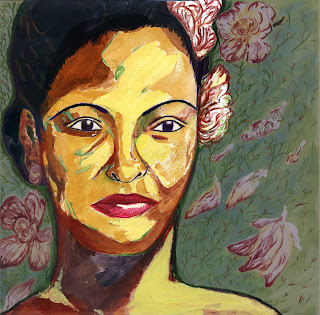 This is 3x3 magazine drawing of a Taurus blown up for 6x6. Not for a real magazine, I'm afraid, but for my school Illustration class. Hope you enjoy the goofiness. 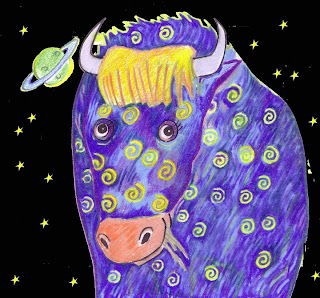 Friend's Illustration: The Evolution of a Star

A friend made this on a whim and I like it very much (click to enlarge).
It is a simple representation and yet the message is quite clear. She is in marketing but I guess there's an artist hiding in all of us.

Even more? (Cycling in Toronto)